Maggie Havoc has spent much of three years writing and mapping story lines that create not only a novel, but a dark fantasy series. She was born and raised in England, but has also lived in Spain and Mexico. Her travels and life experiences have helped shape her story lines and have given her characters a palpable flare. 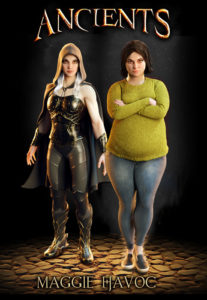 Within the United States she laid roots in west Texas, where she joined a police department of approximately 1,200 sworn officers. During her career Maggie worked various assignments, including the police academy where she was a firearms instructor and a training specialist.

One day, while off duty, she stumbled upon a large apartment fire. No emergency vehicles were present, and residents were barely waking in the early-morning hours. Maggie’s actions that day earned her a Texas State Medal of Valor.

Maggie trained for almost two years and submitted to a three-day intensive SWAT tryout. She qualified and was assigned to the elite team. Her initiation and time spent around the team of thirty-seven men taught her humility and above all, what women are truly capable of.

In her protagonist, she hopes to have imparted some valuable insight on striving for the seemingly impossible and remaining humble during achievements and victories, as well as some hard-earned lessons along the way. She now lives In Northern Oregon, overlooking the great Columbia River with her unsupportive pets.

Stay In the Know

Visit Maggie Havoc’s Instagram and Facebook to follow along on her Journey. Be sure to subscribe to her Newsletter to receive monthly updates as well as giveaways, Arc Reader and Beta reader opportunities and author insights into writing and publishing. Maggie loves to hear from her readers!

Join My Newsletter “The Monthly Havoc”